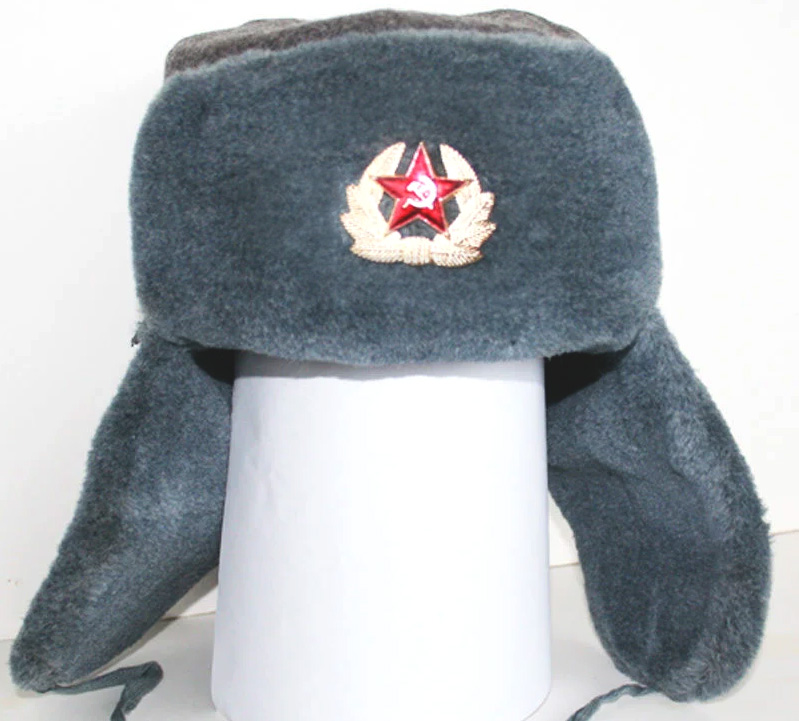 Ushanka belongs to the winter headdress. This type of cap was widely used in Russia, which made it one of the main Russian symbols in other countries. The name of the garment is associated with its characteristic feature of the turn-down "ears". Ushanka accepted for supply in the Navy. The product was a cloth hat with a visor and headpiece with headphones. Being lowered, "ears" were tied on the chin. In 1940, winter fur earflaps were introduced in the Red Army and police.

The garments were made of light sheep fur, and then their color changed to gray. In wartime, due to the large volumes of production, earflaps were made from faux fur. Initially, a five-pointed star was located on the caps for the rank and file and sergeant, and in the 70s of the 20th century the stars were replaced by emblems. In full dress, the colors of the caps corresponded to the military branch. Especially for cold climates, advanced models of hats were produced. one and a half. They differed from standard earflaps with elongated headphones.

What is a Russian winter hat called?

Winter hat ushanka - warmth and comfort. that protects the head, ears and part of the neck from severe frosts. This headpiece is designed for comfortable heat conservation in the cold season. It is in great demand among Russians in the particularity of northerners. They have a large variety of models in which not only numerous forms of sewing are used, but also drag-resistant materials.

The most winter gift from Russia.

A hat with ear flaps in frosty days turns from a popular souvenir into a vital necessity.

Ushanka came to Russia from the north or south - nobody will tell for certain. A hat has taken root in the peasant milieu.

“There is a lot of Russian Army surplus gear, but Americans want the Ushankas. They're warm.”

Ushanka - An attribute of wartime. In 1919, a cap with earflaps settled in the uniform of the White Army and became known as Kolchak - by the name of General Alexander Kolchak. The cloth headdress was then sewn from a Japanese cloth. Both soldiers and command personnel wore it. The officers were distinguished by a cockade or a white-green ribbon.

The workers and peasants of Petrograd picked up the fashion for the Finnish ushanka ear-flaps. And it was already one in one modern winter hat.

At the beginning of the 30s of the last century, the ushanka “entered service” in the Red Army as part of the winter uniforms of soldiers. The sailors were the first to wear this headdress. In the Navy, earflaps - the usual black for the Navy.

Ushanka is part of the uniform of not only the Russian army. China and North Korea, Mongolia and Canada, Sweden and Finland. The north the country, the more warriors value warmth

Ushanka has long gone beyond practicality. Appeared on the catwalk. The winter hat became a high style thanks to Vyacheslav Zaitsev. The idea of a Russian couturier was picked up by Dolce & Gabbana.

It is this headdress that is indicated simply in the Oxford Dictionary - shapka.

Ushanka is just a shapka. Often it is called the Russian hat or shapka. In English-speaking countries there is the word earflaps, but according to the inhabitants of these countries themselves it is rarely used. The most commonly used words are "ushanka", "russian fur hat" and "shapka". Even the dictionary The Dictionary of Russia indicates that the word earflaps is rarely used in America. Of the most common variants - shapka, the word ushanka, it is among such russian words as kolbasa, valenki.